I watched Melancholia yesterday. I don’t usually like Lars von Trier, but this movie is interesting in that it’s like a “the end is coming” movie with a planet and an approaching impact, but the overall tone is about character, and also about depression.

The main character - an unusually good Kirsten Dunst - is similar in ways to Lily, the main character in my book. Lily knows things, as does Justine in the movie. I wonder if there are people out there who can tra-la-la through life when they know. It’s like, all the religion in the world doesn’t change the reality of what’s in front of you.

What does Lily know? What does Justine know? It’s also what dearcoquette knows. It’s okay to embrace it, but it really is depressing, and so you have to embrace love instead.

If you watch Melancholia, it’s the 678 conversation between Kirsten Dunst and Charlotte Gainsbourgh (who wears great clothes).

In other news, am definitely going to start a book with a wedding. The dramatic tension is fantastic, especially such a strange wedding, in such a big house. On more thing - I am a huge fan of staged settings. I think of the spaces in my text as flat, the depth comes the internal struggle / journey that the characters go on. I like to cut them, edit the next one in as the curtain has gone down and come up again. Melancholia has one house, you hardly ever leave. I love it when a house or a country or a thing is cast as a character. My next novel has a whole (!) farm. If I cast the farm as a “person”, then - did you know - the farm can become antagonistic or supportive, it can be reactive, do things, stop things, etc. 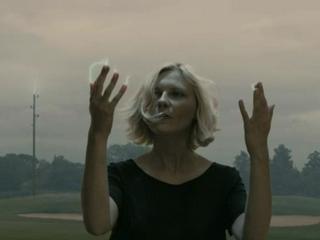 The movie never actually goes to this picture place. U assume that with the inversion of the energies (approaching planet) that powers shall be delivered, but alas alas …

Horrific intro and ridiculous end, but …. well, personally, it made me happy that I have already written the book that I have just written, that I have had a character that knows things, and survives, happily, for it, moving past melancholia/nihilism.