Food, romance, humour and a bit of mystery: you can’t go wrong, really. Or some can, but Kathryn White doesn’t. Her third novel is on point. T’is even a photograph of me with my thumbs hoiked into my jeans, smiling as if that’s a normal pose for authors of somewhat smutty, food-rich prose.

THINGS I THOUGHT I KNEW

This book deserves to leave a deep imprint in our literary soil. It deserves to be studied at tertiary level because only the very closest reading can do justice to its multi-textured denseness.

LitNet “Having read this stunning new novel in one sitting I am willing to wager a large amount on the fact that White’s novel – deeply poetic, acutely observed, overwhelmingly emotive in places – will go some distance in establishing her as a compelling new voice on the South African literary scene.”

Leigh Andrews “Wow. I’ve just finished Kathryn White’s Things I Thought I Knew and feel like I’m stumbling around in a stupor, still a bit lost in the magic of the world White creates in her second novel. That’s why it’s taken me a week to start writing this review.”

EMILY GREEN AND ME 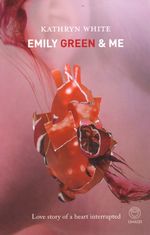 These are some reviews for my debut novel ‘Emily Green and Me’, published by Random House Umuzi in September 2007.

“That hopefulness is what makes Ms. White’s book stand out from some of the master writers her country has produced…”

Karabo Kgoleng, the host of SAFM Literature, said in the Daily Maverick …” .. “There are brilliant young writers,” she says. “Like Kate White. I thought her story ‘Emily Green and Me’ was brilliant. It was inspired and it has universal appeal… She’s written it well, the imagery is right and she’s put in the social and the political backdrop. You get young writers who are able to do that.”

SA Patridge says “Emily Green and Me is one of my top ten must read South African titles.”.

LitNet, said “Kathryn White is a vonds” and a lot more, (this is probably my fav review, even tho the words are in really difficult Afrikaans)